In Switzerland, the average size of a brood of Barn Owls is 5 owlets. These baby owls noisily discuss inside the nestbox while being raised for two months. Our research has shown that the owlets negotiate who will get the next prey brought in by their parents. 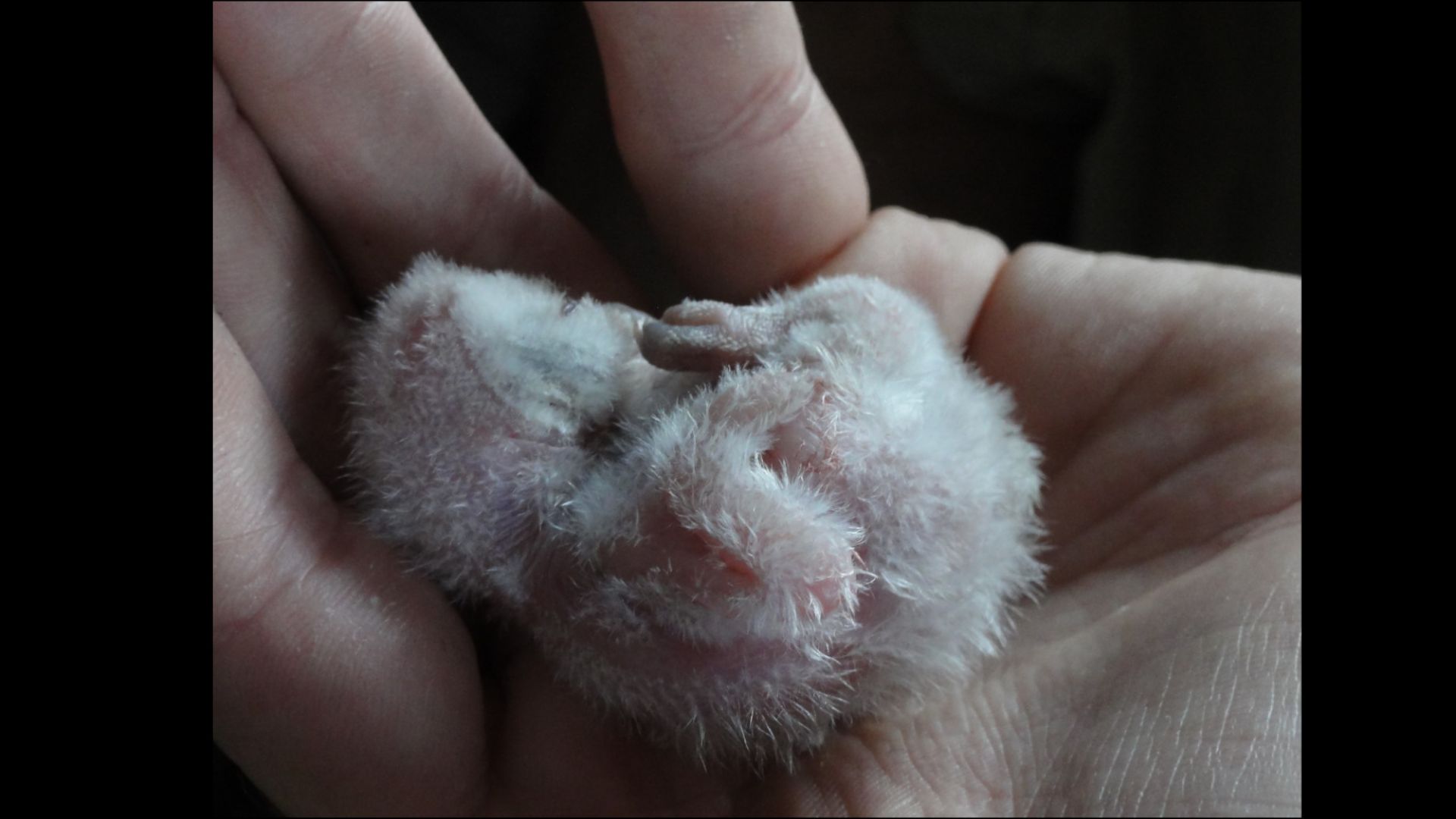 1/9 Nestlings hatch after approximately 32 days of incubation. They are born without feathers. This nestling is only a few days old. © Joy Reding 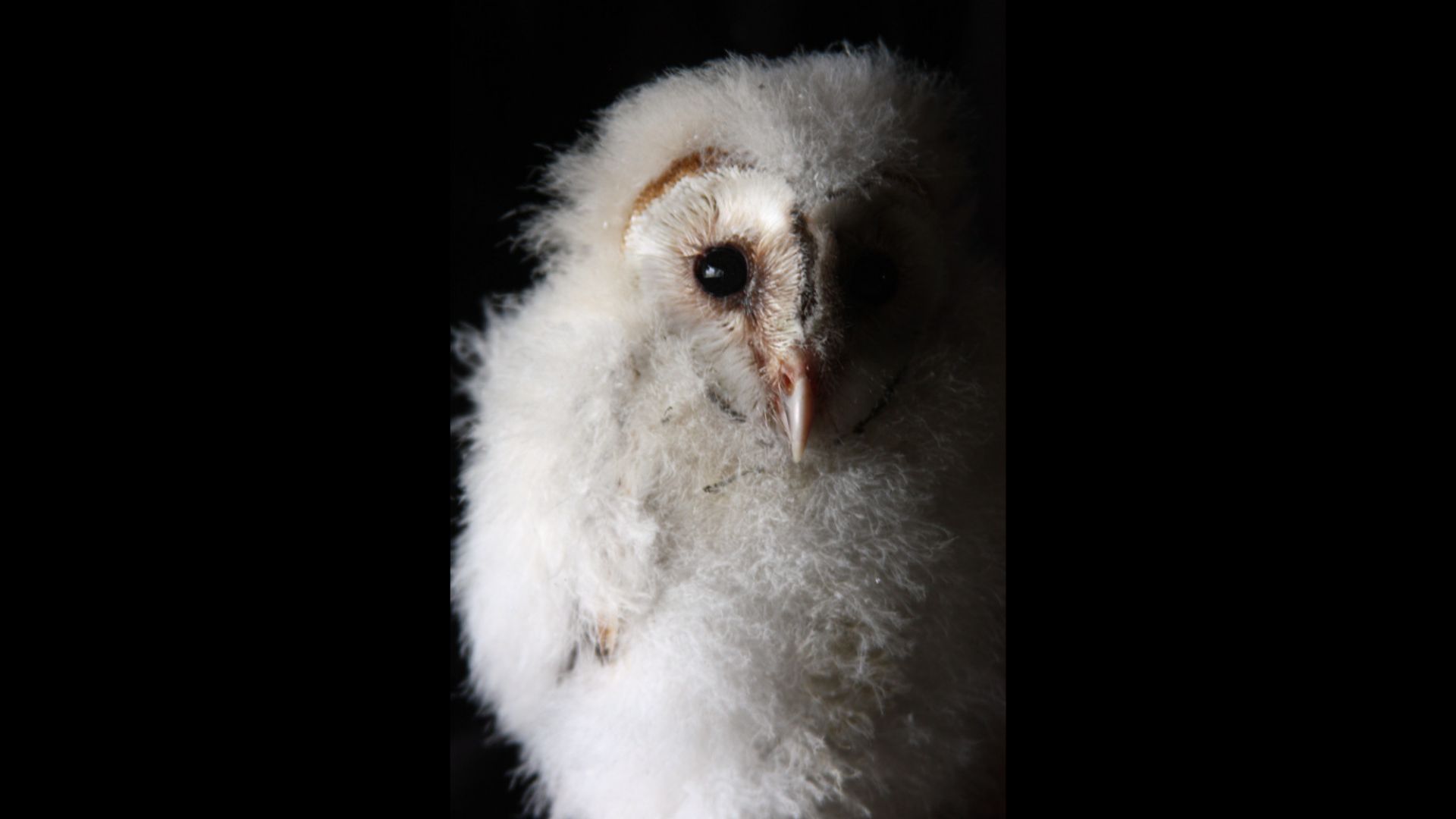 2/9 While they grow, the owlets are covered in a white down. This nestling is a bit less than one month old. © Paul Béziers 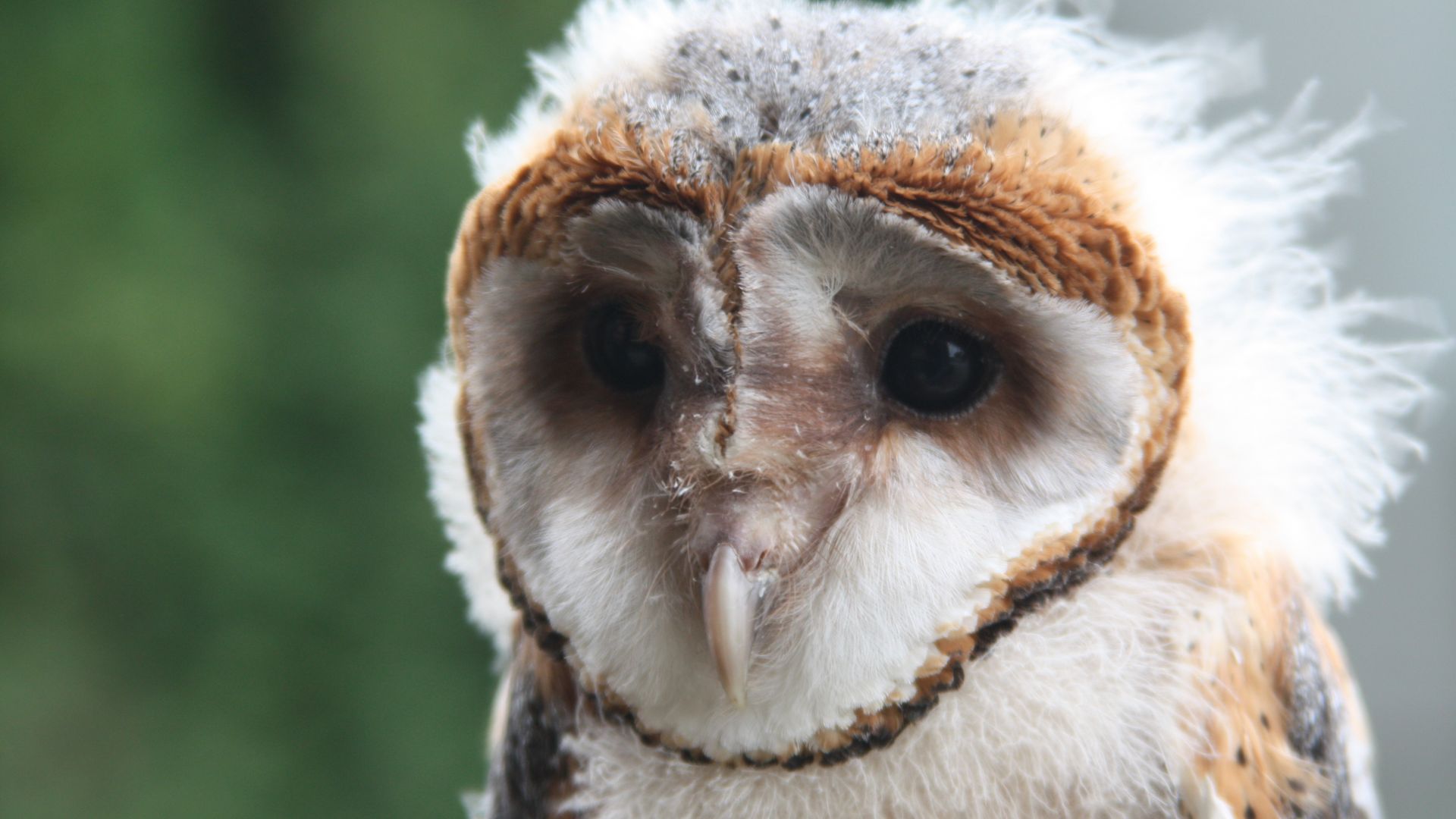 3/9 Slowly, the down gives way to adult feathers. At about 2 months old, the owlets have lost their downy feathers and are ready to take their first flight. © Paul Béziers 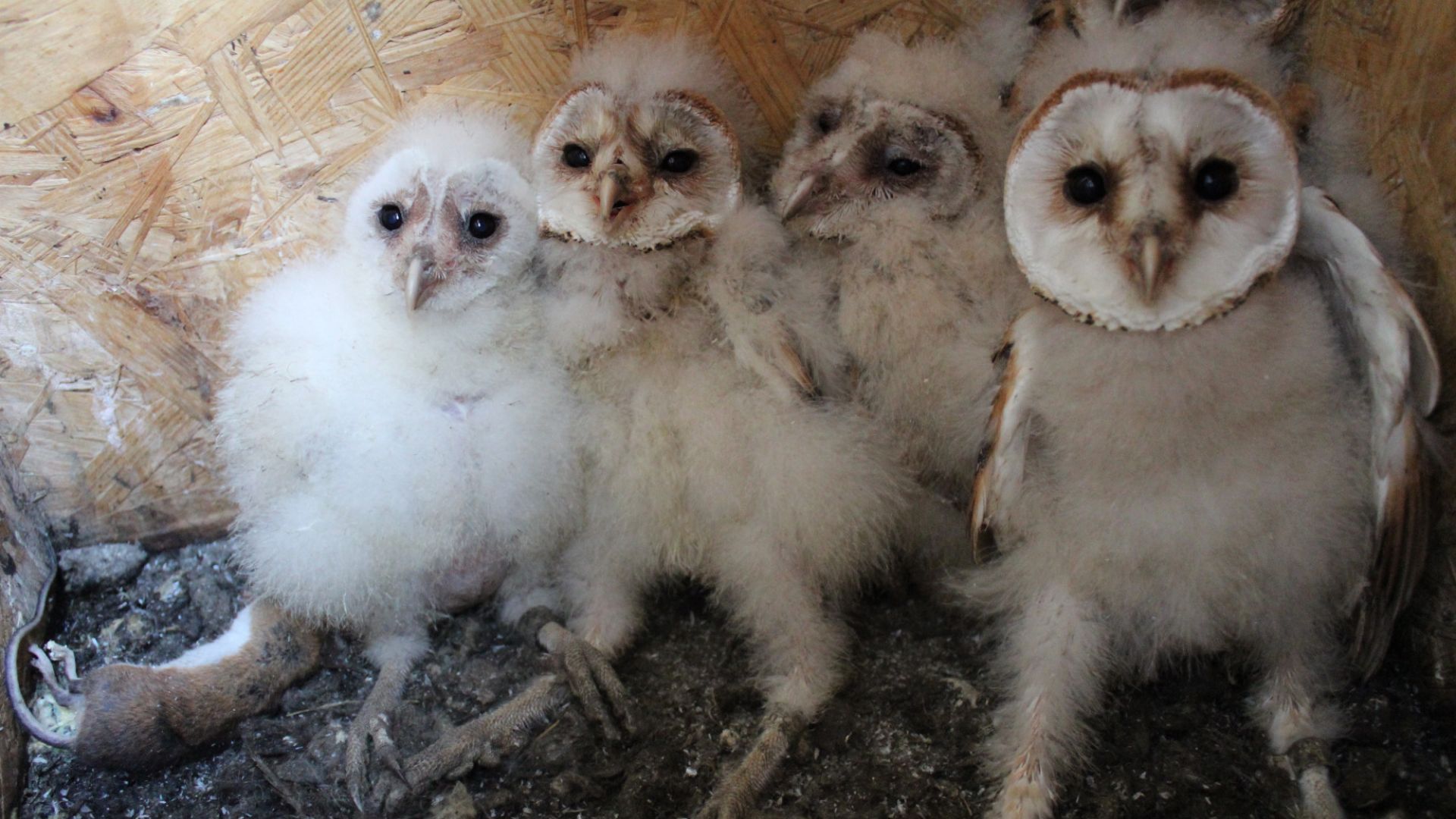 4/9 The owlets are born 2 - 3 days apart. This means the brothers and sisters from the same clutch are not the same age. This phenomenon is called hatching asynchrony. © Amélie Dreiss 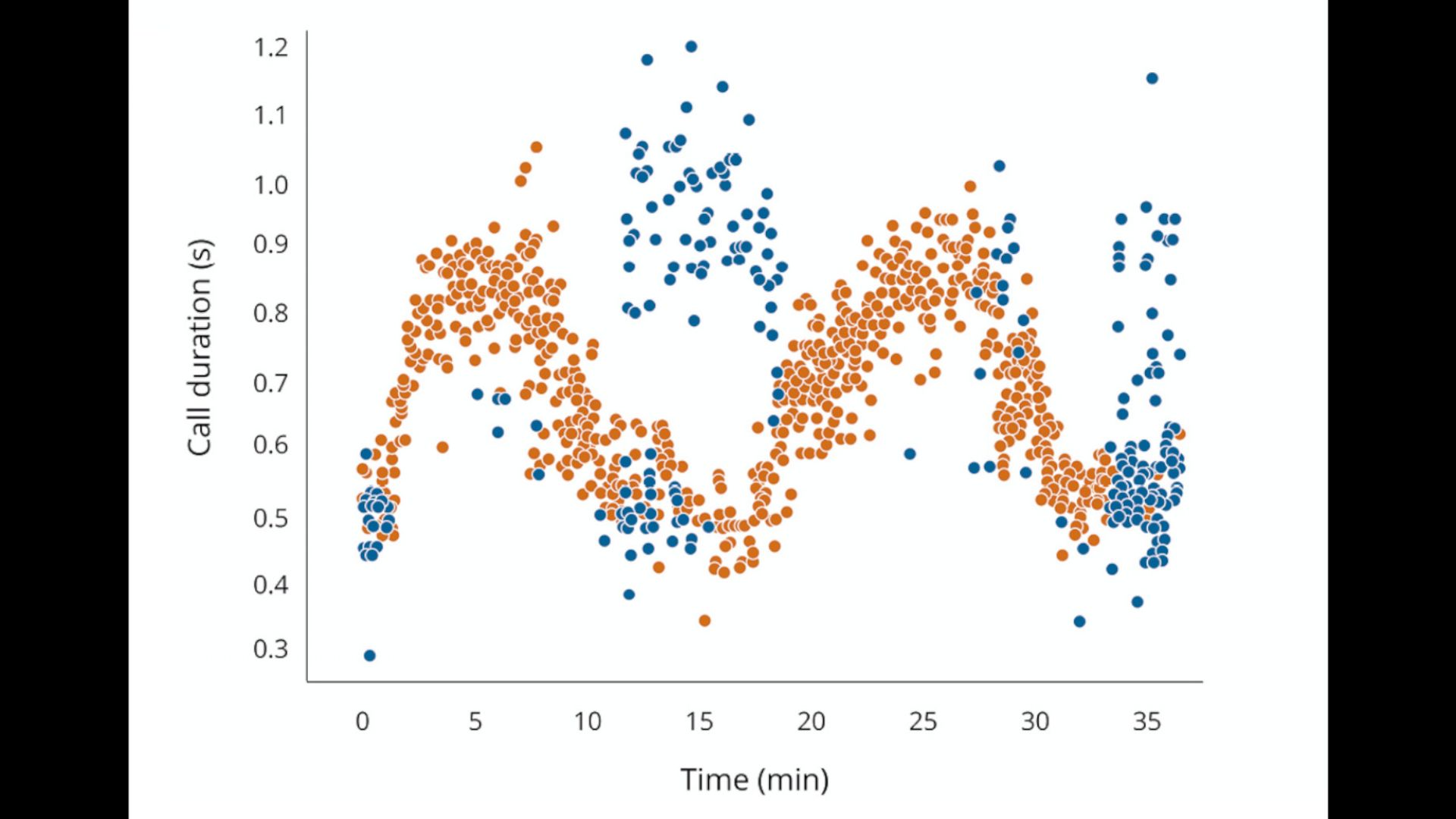 5/9 This diagram represents the length of an owl’s cries over time. Each point represents a cry and each color represents a different owlet. Here, we see two nestlings “discussing”; each has its turn to talk. This is how the owlets express how hungry they are.

6/9 In the nest, the owlets vocally negotiate to know who will receive the next prey brought back by their parents. Sometimes, we even notice gifts of food between nestlings, as can be seen in this video of one owlet in the center offering a rodent to the owlet on the right. © Pauline Ducouret 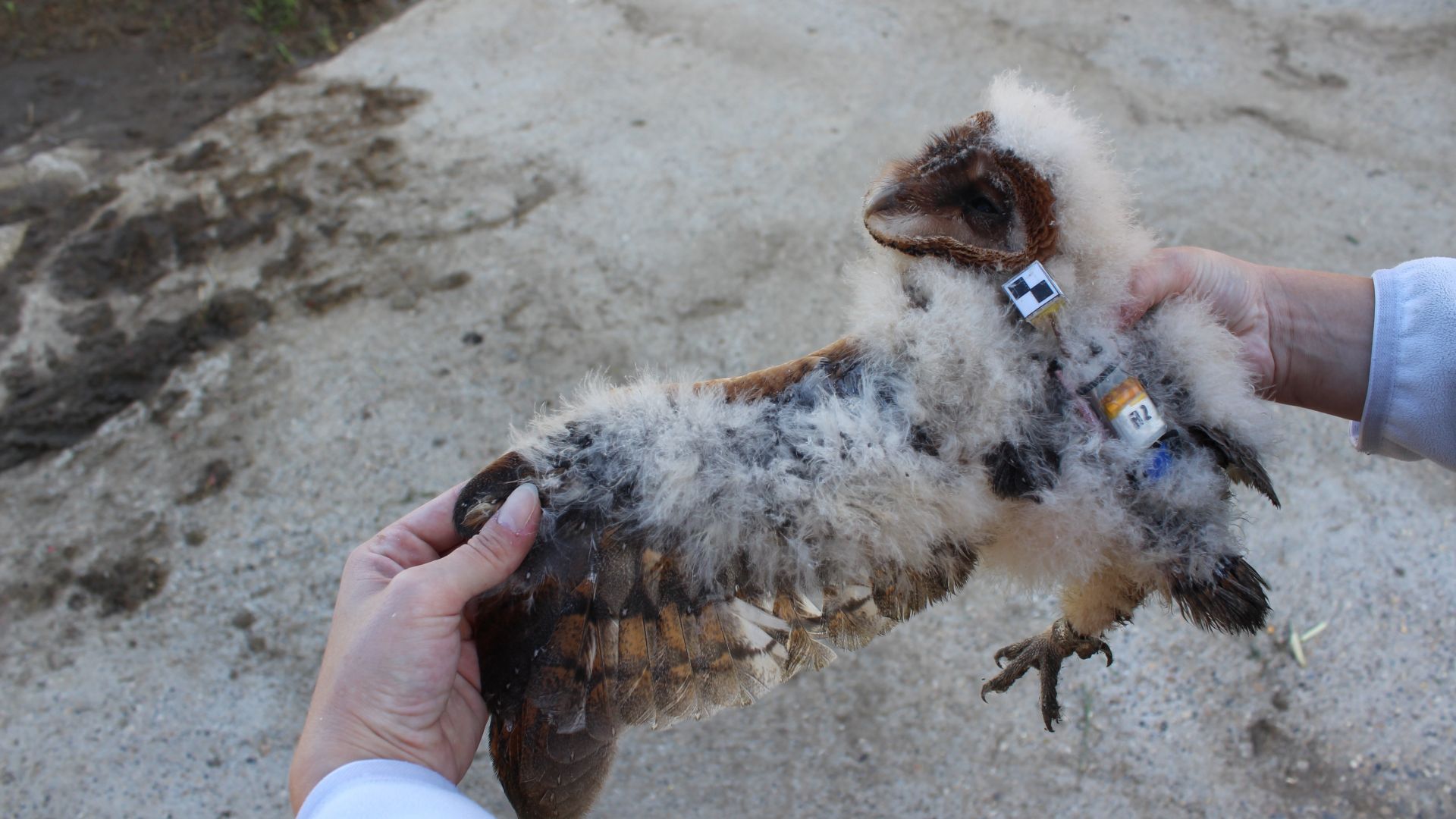 7/9 Nestboxes are equipped with microphones so we can study the behaviors and cries of the owlets inside. They are also filmed and recorded. © Amélie Dreiss 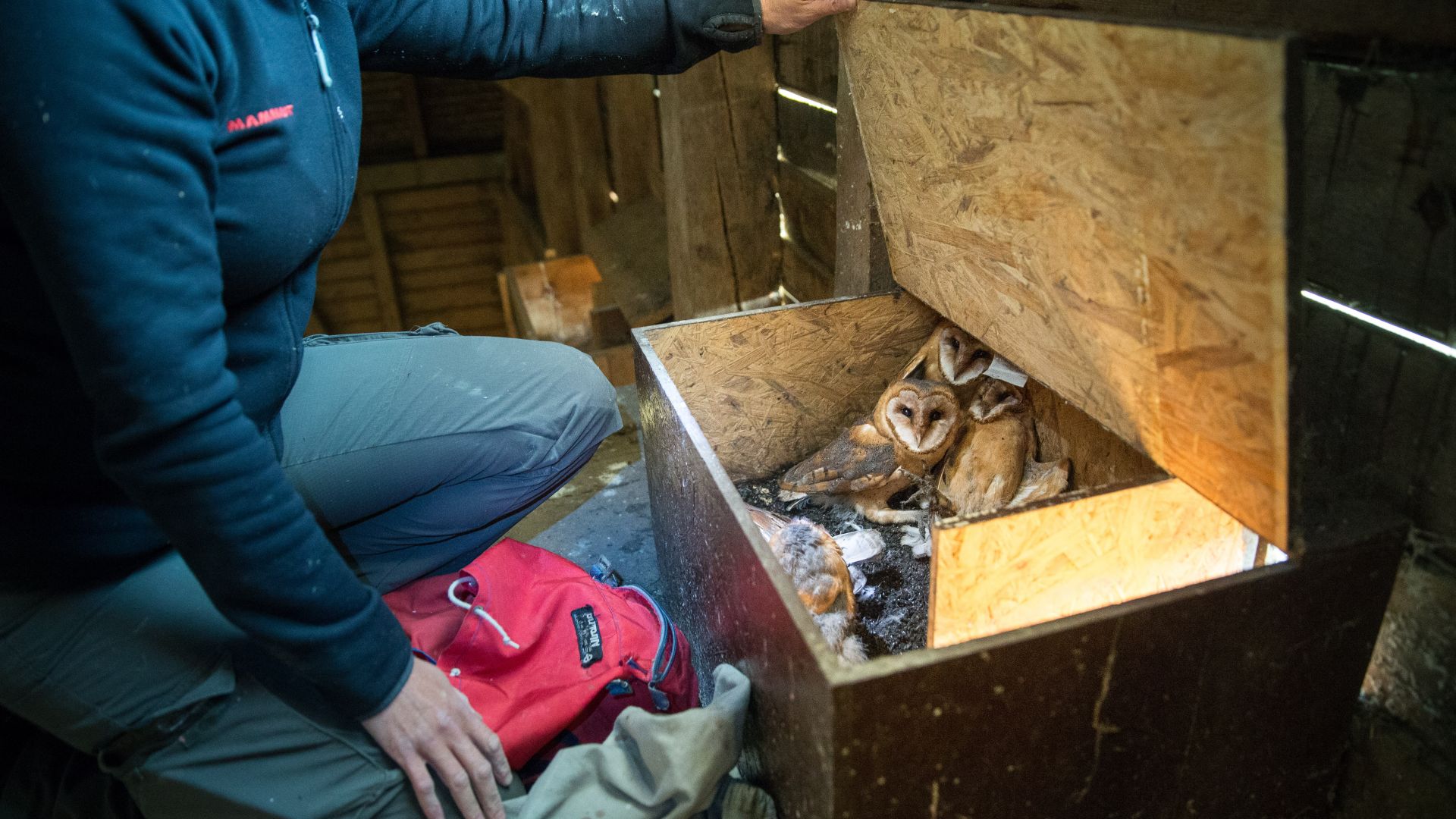 8/9 When the juveniles are old enough to fly, their plumage is very similar to an adult’s. The nestbox is beginning to be too small. Lukas Linder © Swiss Ornithological Institute

9/9 A brood from start to finish in just over 3 minutes. In reality, a little more than 3 months pass between the first egg being laid and the young birds’ first flight. Images © Guillaume Rapin

A particularity of Barn Owls is that they produce broods of nestlings who are not the same age. This happens because the female lays an egg every 2 or 3 days. She begins incubating as soon as she has laid the first egg and so the eggs hatch at intervals of a few days apart. This makes babies of different ages. In a brood of 5 owlets, the oldest will be, on average, 10 days older than the youngest. These age and strength differences could potentially lead to violent conflicts, especially around sharing food. And yet this is not the case!

Our research into the communication between Barn Owl siblings has shown that the juveniles use their cries to negotiate who will get the next prey brought in by their parents. The young owls adapt their behavior with respect to the cries of their brothers and sisters and there are social rules to be respected, like allowing everyone a chance to speak. The principle is the following: longer or more frequent cries indicate stronger hunger. Each owlet expresses itself and it’s generally the one who is the hungriest who can request the prey directly from the parents, the others leave the way clear. In this way, there are no conflicts.

These peaceful negotiations are accompanied by some other notable behavior. Mutual preening, which involves removing parasites and smoothing a sibling’s feathers, works as a kind of currency, and although there is stealing of food or even cannibalism of dead individuals, there are also gifts of food, especially when the latter is abundant. Older and healthier individuals are the ones who give their prey to the hungriest or to those who just offered preening before the meal. What this means is that Barn Owls, who are voracious predators and equipped with formidable weapons, reveal themselves to be mostly peaceful with their siblings.