One of the remarkable characteristics of Barn Owls, and one of our main research areas, is its color polymorphism. As evident in its Latin name Tyto alba, Barn Owls vary from white to reddish-brown, with or without black spots on the belly and chest. Melanin pigments, which are also present in humans and widely distributed throughout the animal kingdom, are responsible for these color variations in the bird’s plumage. 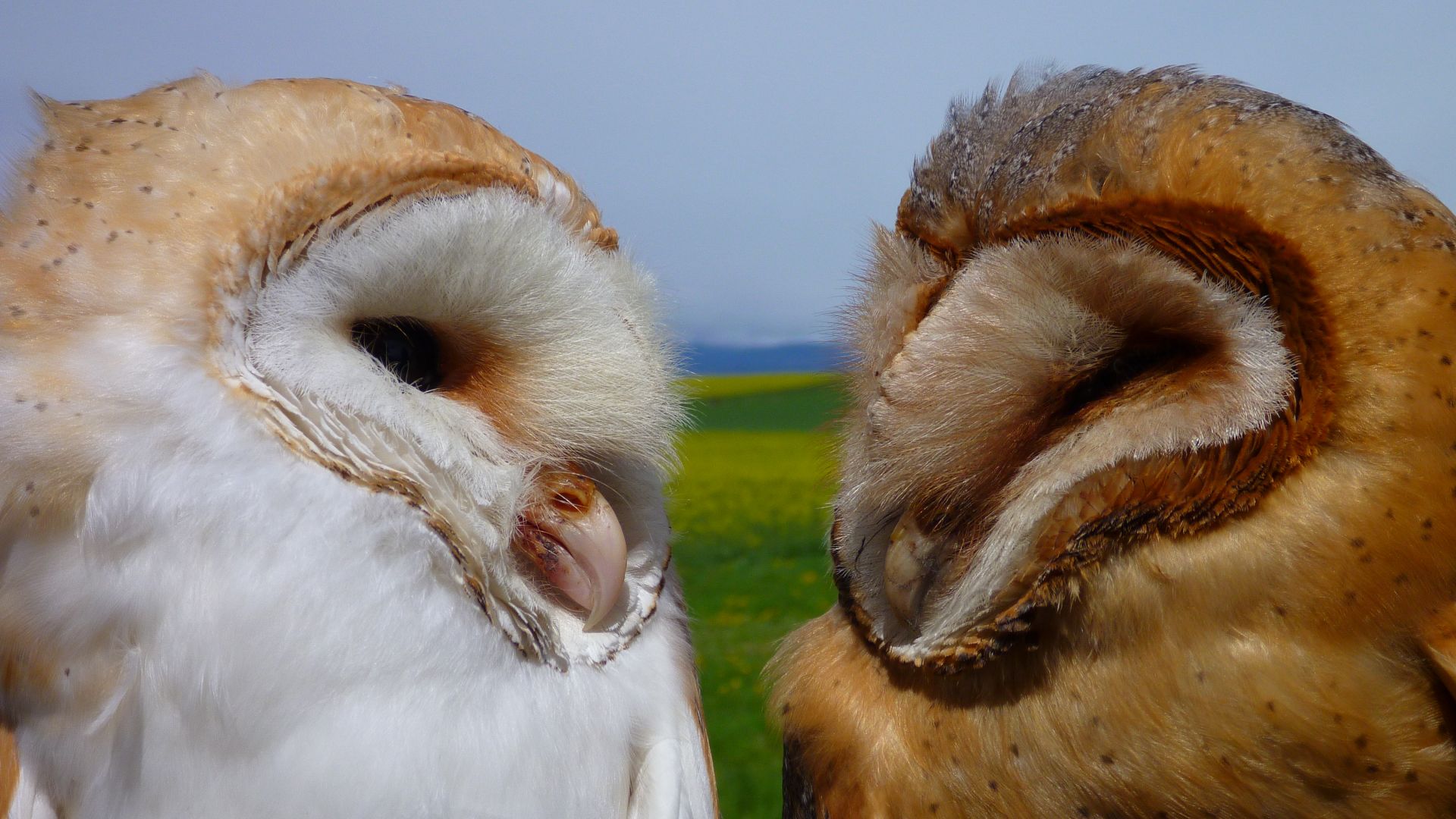 1/7 Barn Owls may be colored white to reddish-brown and be more or less spotted. © Isabelle Henry 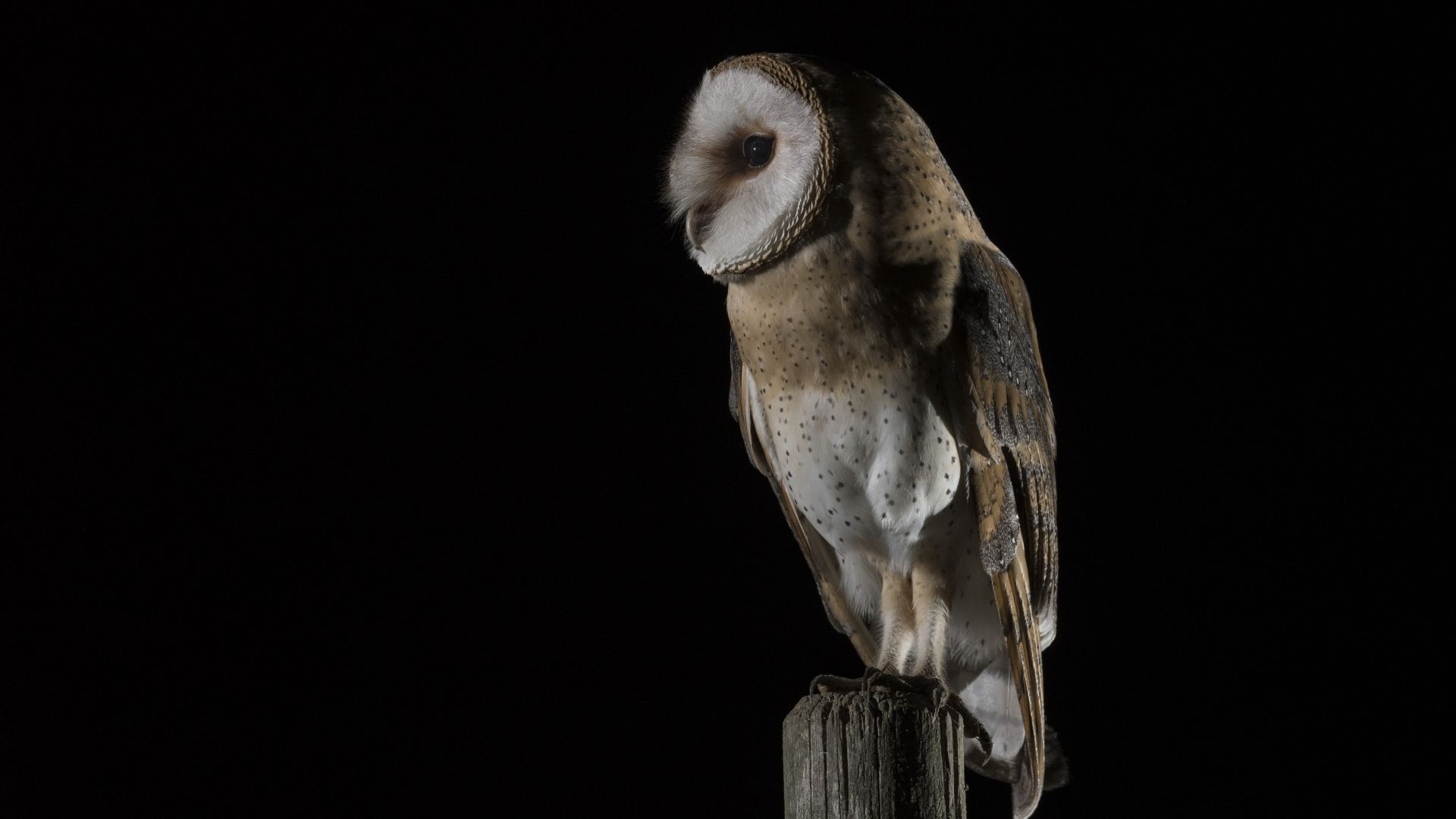 2/7 This owl has a reddish-brown chest and a white belly, as well as numerous black spots. © Guillaume Rapin 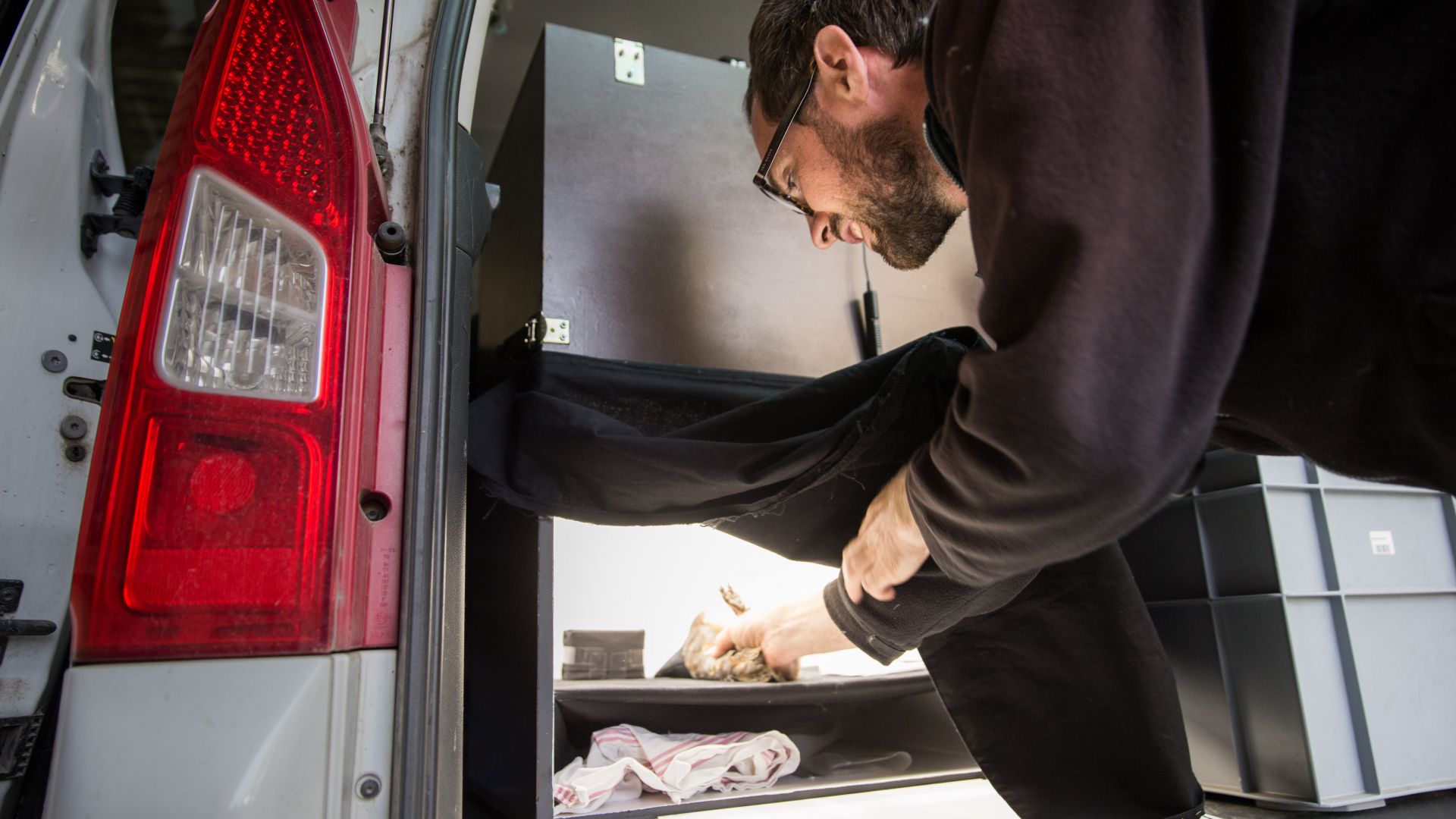 3/7 To precisely measure their color, owls are placed in our “Owl-booth” where their photo is taken. This photo shows a researcher placing the owl inside. The black cloth is then closed while the photo is taken. Lukas Linder © Swiss Ornithological Institute 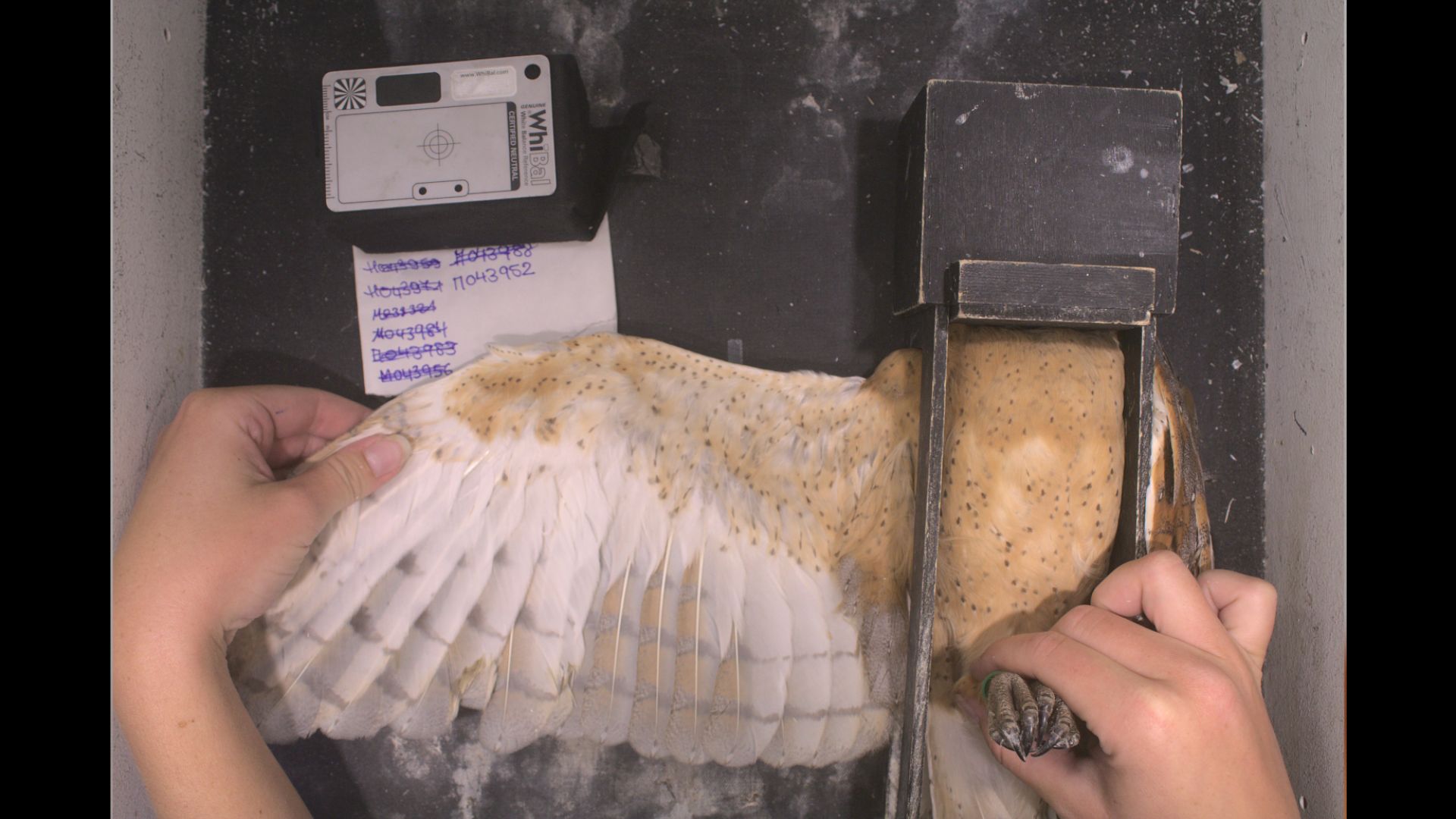 4/7 Photos from our “Owl-booth” enable us to calibrate the colors and compare individuals. Covering an owl’s head calms it. This also protects them from the flash. © Barn owl research group 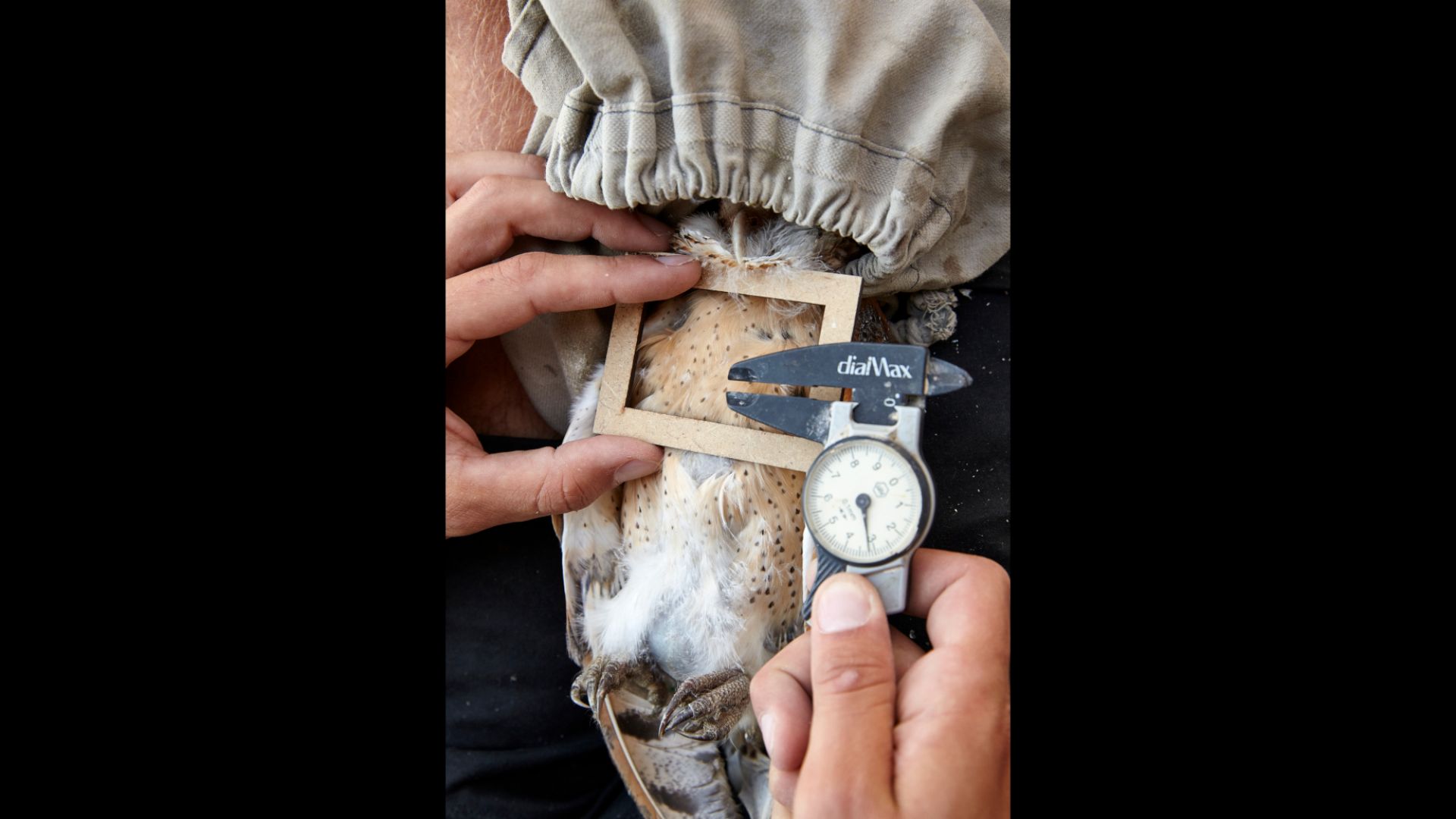 5/7 To collect data about an owl’s plumage spots, we count and measure all the spots in a standard-sized rectangle that we place over the belly and chest. © Jeremy Bierer 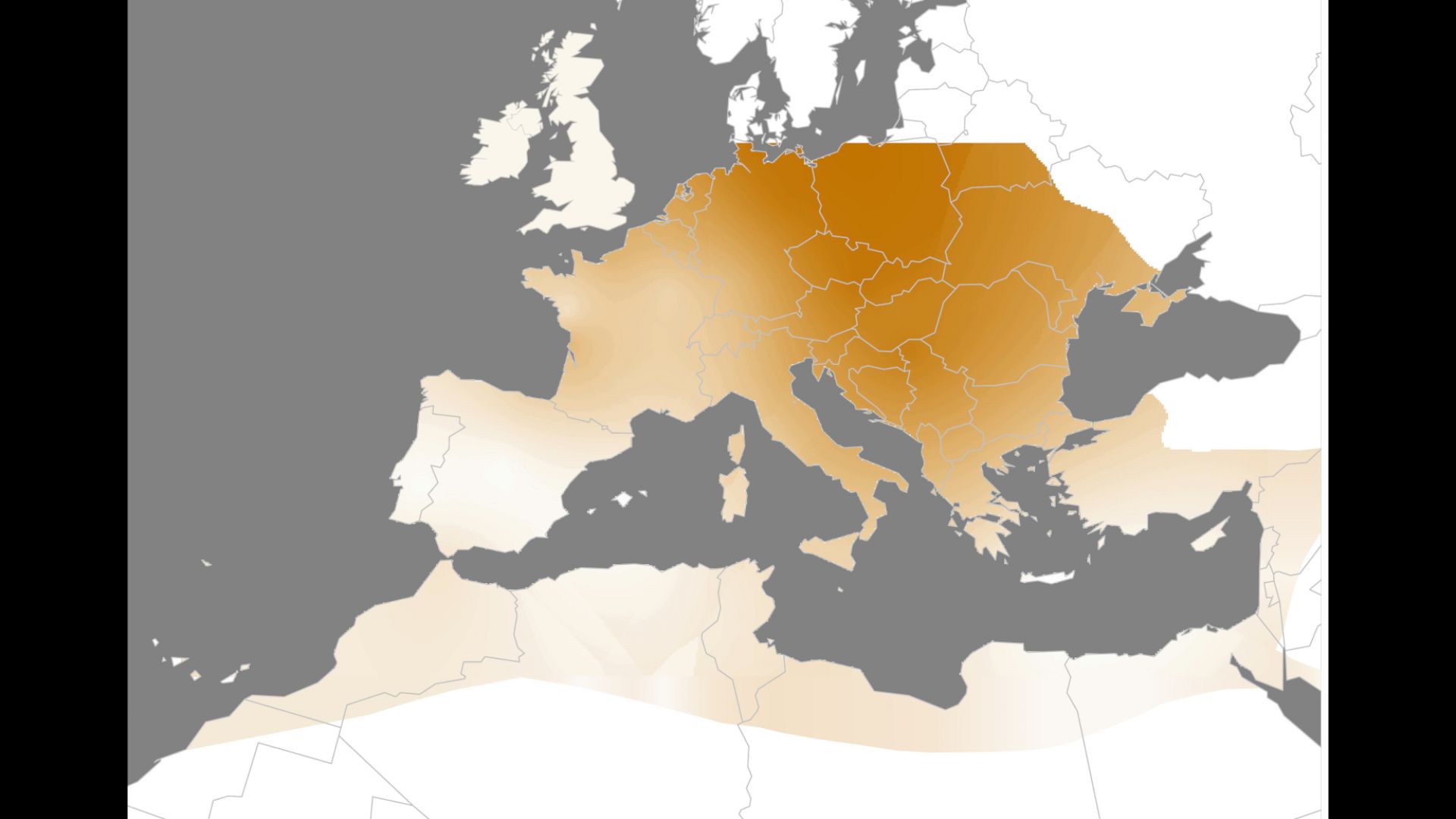 6/7 In northern Europe, Barn Owl populations are redder, while those in the south and in Great Britain and Ireland are whiter. The white areas on the map show the regions where we don’t have enough data yet to estimate the colors. © Sylvain Antoniazza and Reto Burri 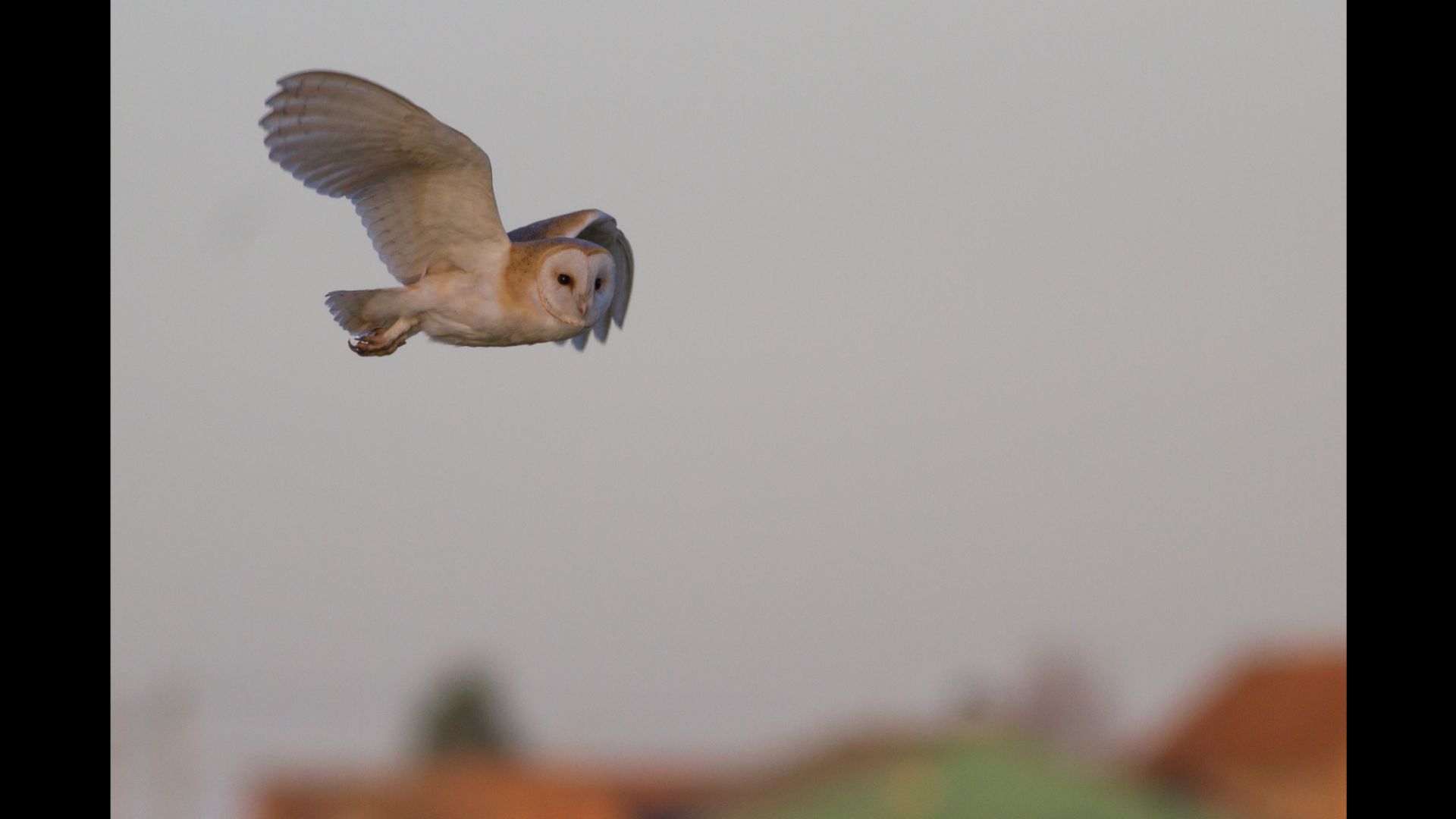 7/7 In Great Britain and in Ireland, Barn Owls are white. An interesting feature of this population is that they regularly fly in the daytime. © Steve Nesbitt @lincssnapper

No two Barn Owls have identical plumage. Varying from a pure white to a dark russet, with or without small black spots on the belly, the chest, the wings and the flanks, Barn Owls are called polymorphic. These color differences raise various questions as to their origins and their role. This is a major subject for our research group, which has been looking at these questions for more than 30 years.

Melanin pigments are what give color to the Barn Owl’s plumage. Melanin is widely distributed throughout the animal kingdom, and is, for example, equally responsible for the differences in hair and skin color among humans. More precisely, several types of melanin exist: eumelanin, a very dark pigment that is, for example, what causes the black ventral spots on a Barn Owl; and pheomelanin, which is what gives the owls the reddish-brown color on their plumage.

Melanin coloration is hereditary, and therefore largely genetically determined. In other words, parents and offspring are similarly colored, because they share the same genes involved in the establishment of melanin pigments. We research which genes are responsible for the owls’ coloring, and how they might be linked to other physiological or behavioral characteristics. One of the genes we have uncovered is the MC1R. This gene codes for a melanocortin receptor, which is a hormone that, among other things, regulates the production of melanin. A mutation on this gene explains 30% of Barn Owl color variation. Our research continues in order to identify the mechanism that enables this gene to have such an effect.

We also recently discovered unique variations in these owls in one of the regulator genes of MC1R: the POMC, otherwise called the pro-opiomelanocortin. This gene produces several hormones responsible for regulating melanin, but that also regulate stress, the immune response, and hunger.

At the same time, we’ve identified the gene responsible for the fact that owls are lighter on their chests than on their backs. This is the agouti gene, which produces a protein whose quantity varies depending on the region of the owl’s body. These variations influence the amount of black or reddish-brown pigments produced when the feathers are growing.

We also study which characteristics are associated with a Barn Owl’s color and which genes are associated with those characteristics. Our research shows, in fact, that the owls’ color variations are correlated to a number of parameters like sex, immunity, and certain behaviors. To give just a few examples: in Switzerland, males are on average whiter than the females; females with large black spots on their bellies and chest give birth to owlets who produce specific antibodies, which might be a sign that the large black spots on females indicate their quality as mothers; owlets that are darker are more inclined to share their food with their brothers and sisters. A gene appearing on a sex chromosome or the POMC gene are good candidates for explaining some of these associations between colors and other physiological or behavioral characteristics.

Certain color differences are geographical as well. Indeed, some populations may be mostly white or reddish-brown. In Europe, generally Barn Owl populations from the north are redder, while those in the south are lighter. Our analyses have shown that this isn’t a random gradient but is maintained through different selection processes in the north and the south. Because of Switzerland’s central position within Europe, our population contains the entire spectrum of color variations. On a worldwide scale, this type of color gradient is also found in both the North American Barn Owl and the Australasian Barn Owl populations, as well as in other similar species.

In insular populations, the owls are often lighter and less spotted. Furthermore, in hot and humid regions, Barn Owls are darker. Finally, we have shown that the former separation of Barn Owls into two sub-species called Tyto alba alba (for the white ones) and Tyto alba gutatta (for the reddish ones) is incorrect because European Barn Owls have a single and unique origin. Which is Tyto alba alba, now simplified to Tyto alba.