We look to understand how Barn Owls use their habitats for hunting, resting, and breeding. This enables us to identify, over time, the different zones needing protection in order to ensure the survival of this species. We also study how owls adapt their hunting strategies with respect to environmental factors like weather or light conditions. 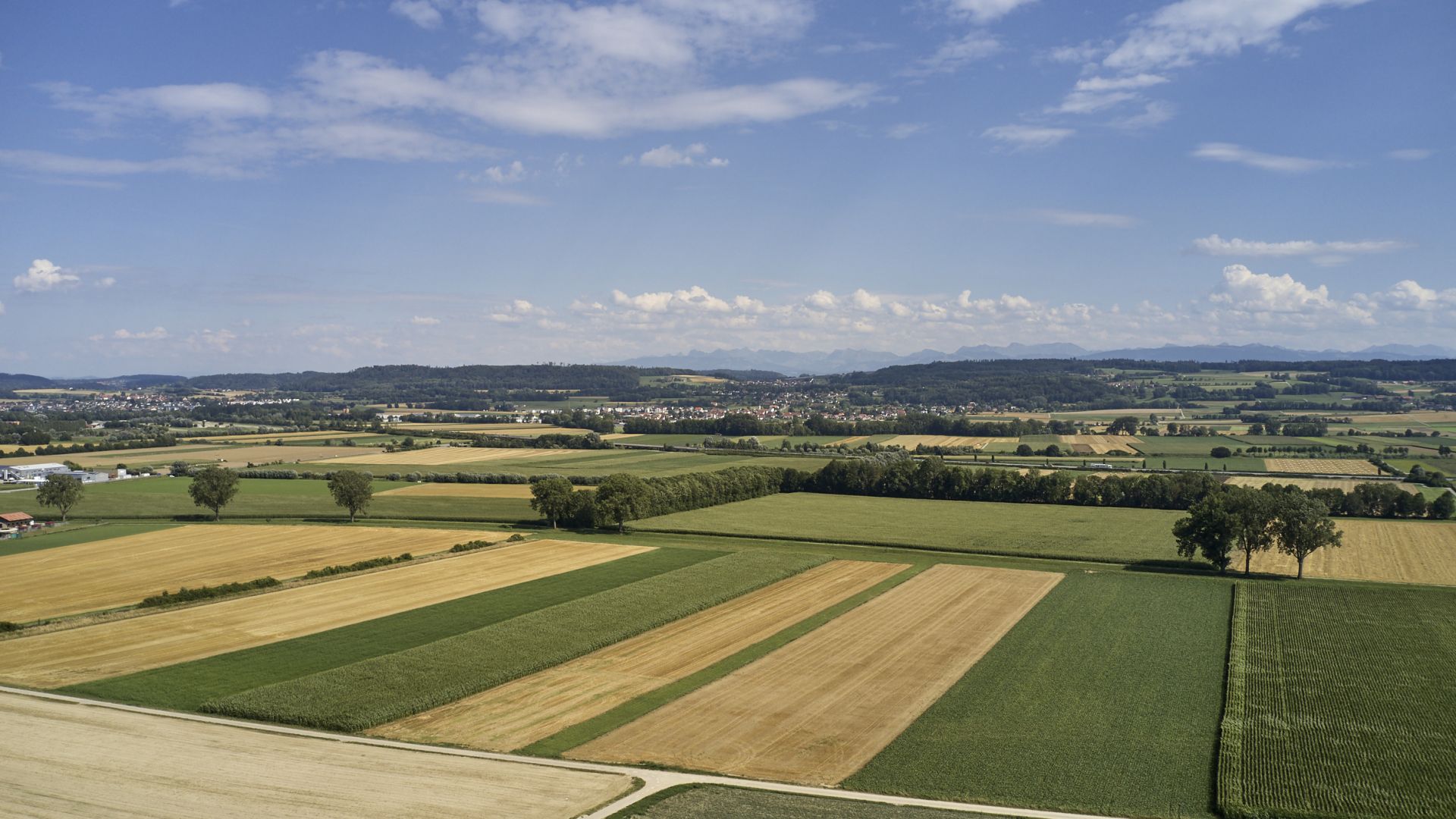 1/10 Barn Owls live in agricultural zones. An ideal habitat containing many small mammals. Perches, either trees or posts, are also beneficial to raptors. This gives them a place to rest and also from which to look for prey. © Jeremy Bierer 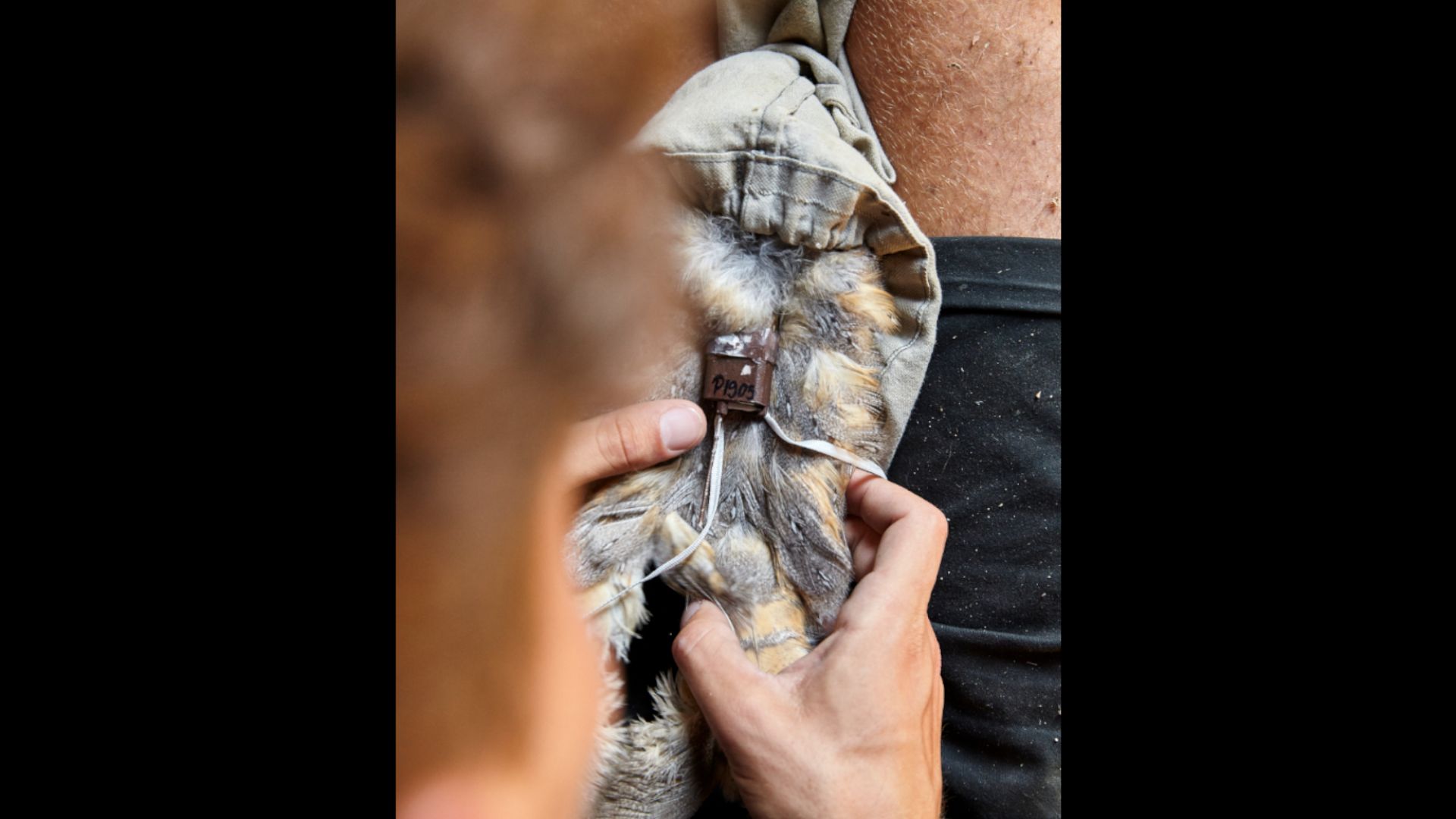 2/10 To study Barn Owl movements, we use very light GPS devices equipped with accelerometers that we place on the owl’s back for about ten days. © Jeremy Bierer 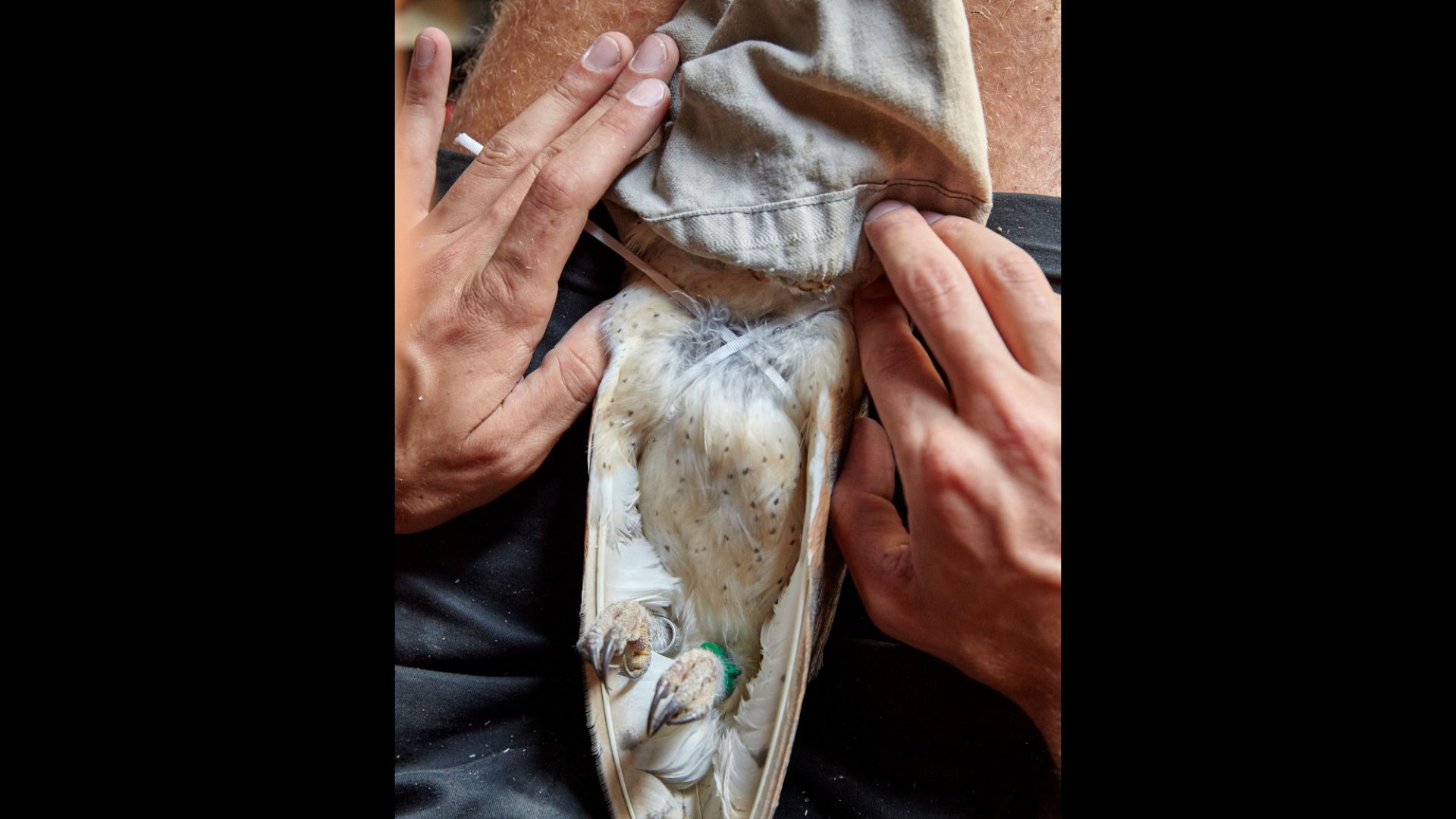 3/10 The straps pass beneath the wings and are crossed over the chest. This makes the device more stable and removes any risk for the owl of being injured. © Jeremy Bierer 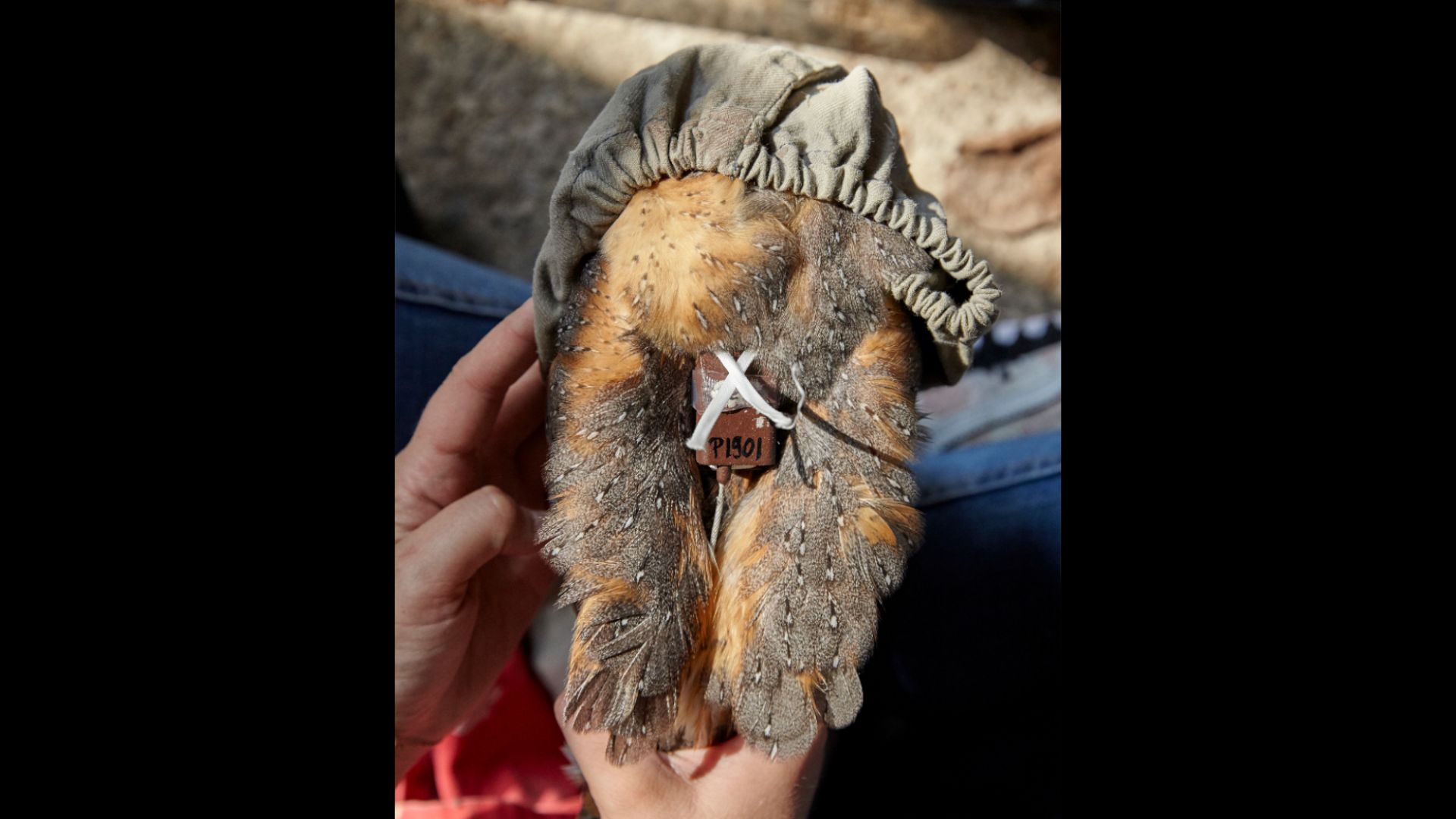 4/10 The straps are then brought back toward the owl’s back and reattached to the GPS, making it sit like a tiny backpack that doesn’t hamper the owl’s movement. © Jeremy Bierer 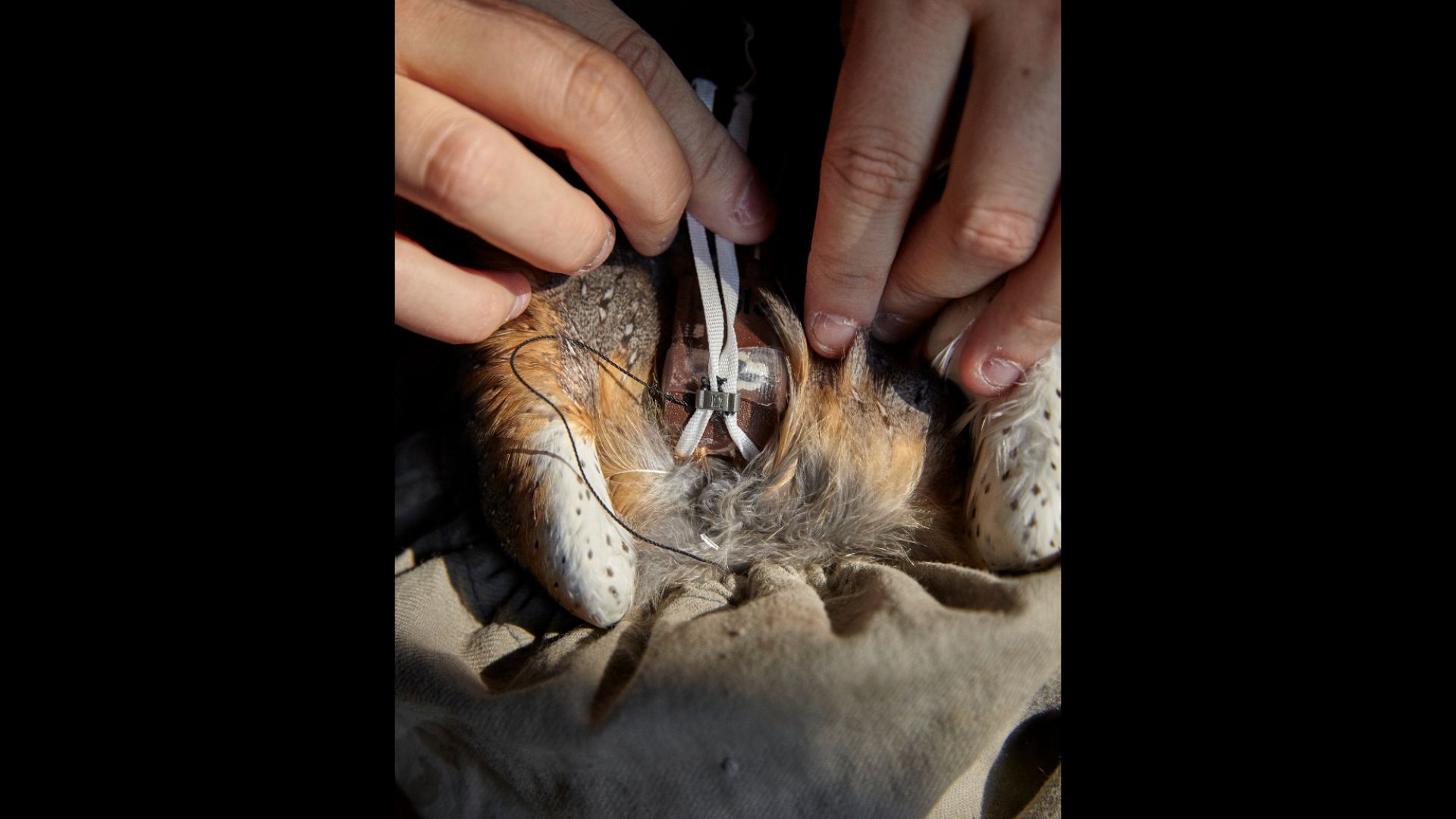 5/10 The device must be solidly secured. The straps are sewn and attached with a metal ring, then glued without touching the owl’s feathers. © Jeremy Bierer 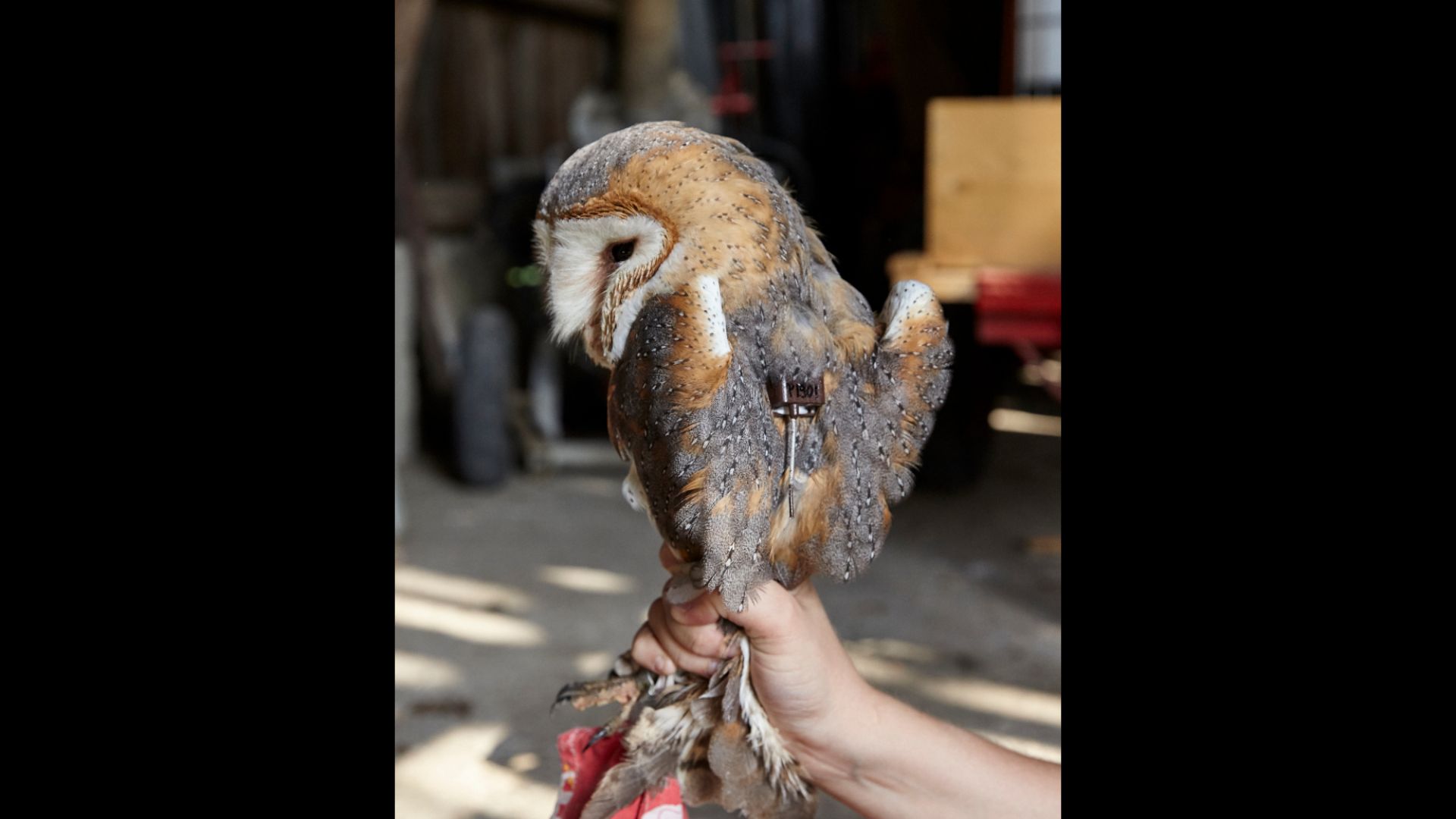 6/10 Once the glue had dried, the GPS device is in place! © Jeremy Bierer 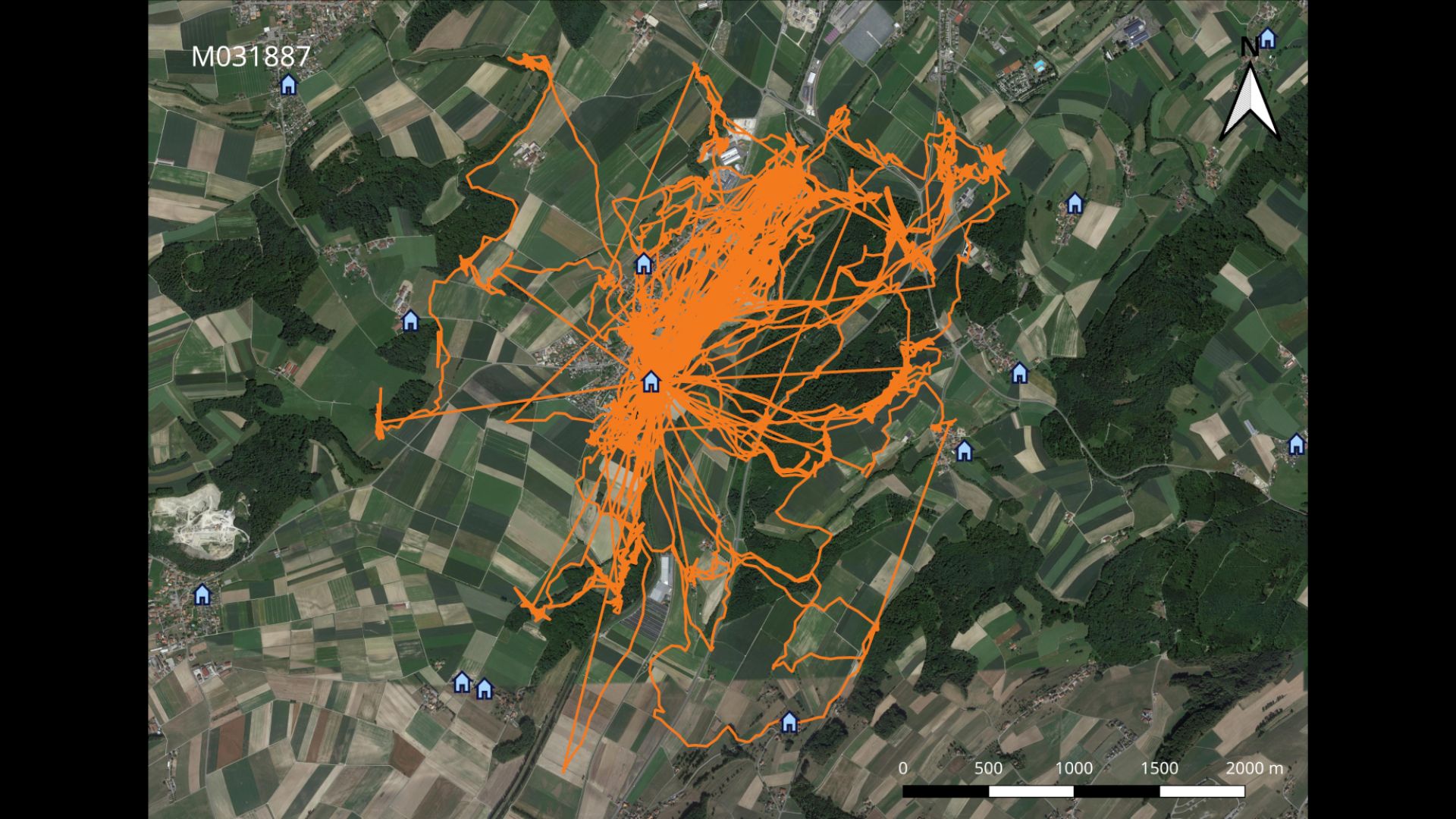 7/10 Once the GPS devices are re-collected from the owls, we have the data (numerous data points) showing the owl’s movements for about 10 days. Here is the owl with ring M031887. Each blue house represents the location of a nestbox. The data helps us deduce in which fields the owl hunted or which nestboxes it visited. Map data © 2019 Google 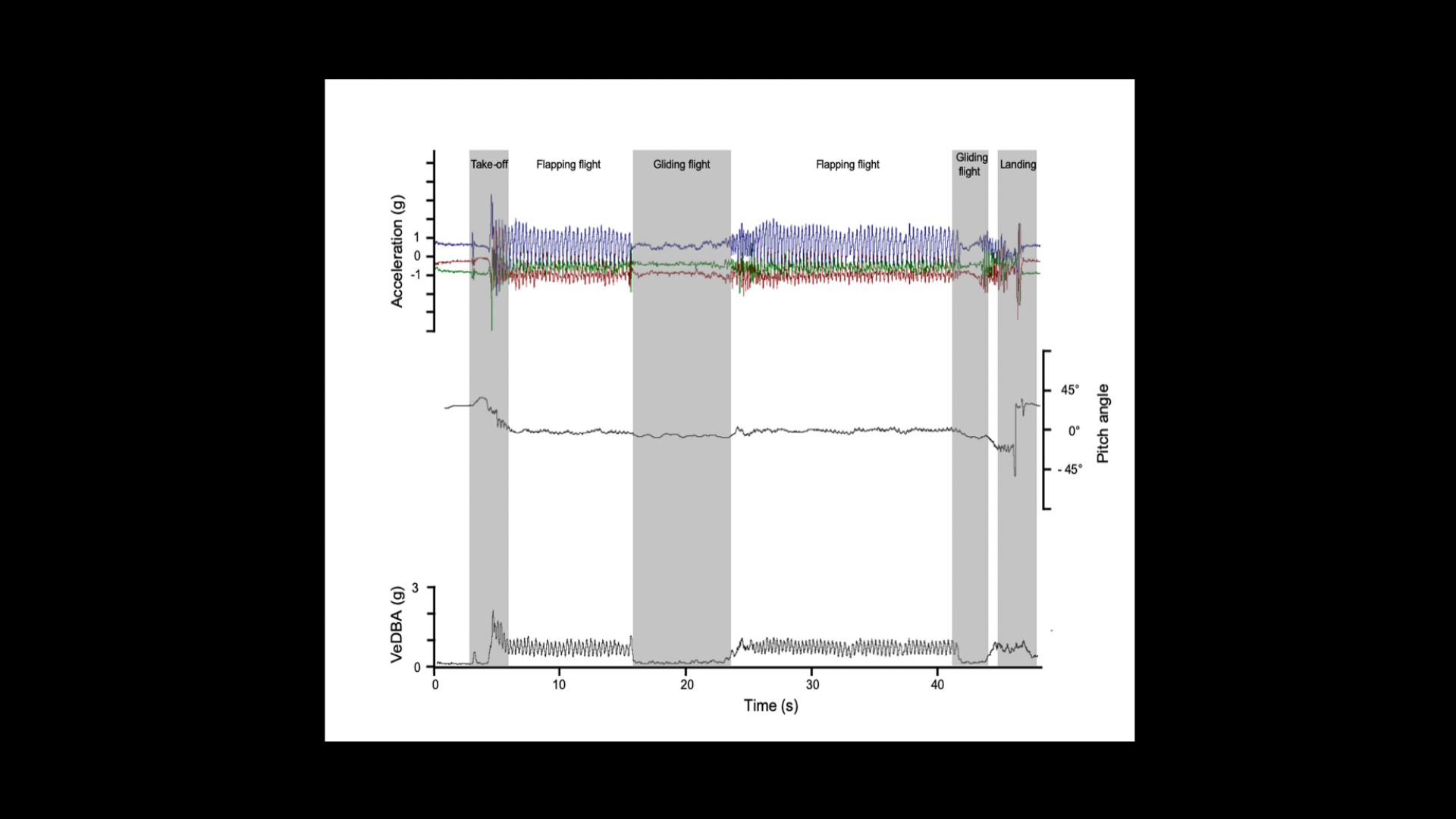 8/10 The data from the accelerometers shows us, for example, if the owl flew while beating its wings (flapping) or by sailing through the air (gliding), from take-off to landing. The “pitch angle” curves and the “VeDBA” represent, respectively, the owl’s body angle and an approximation of the energy spent. © Kim Schalcher 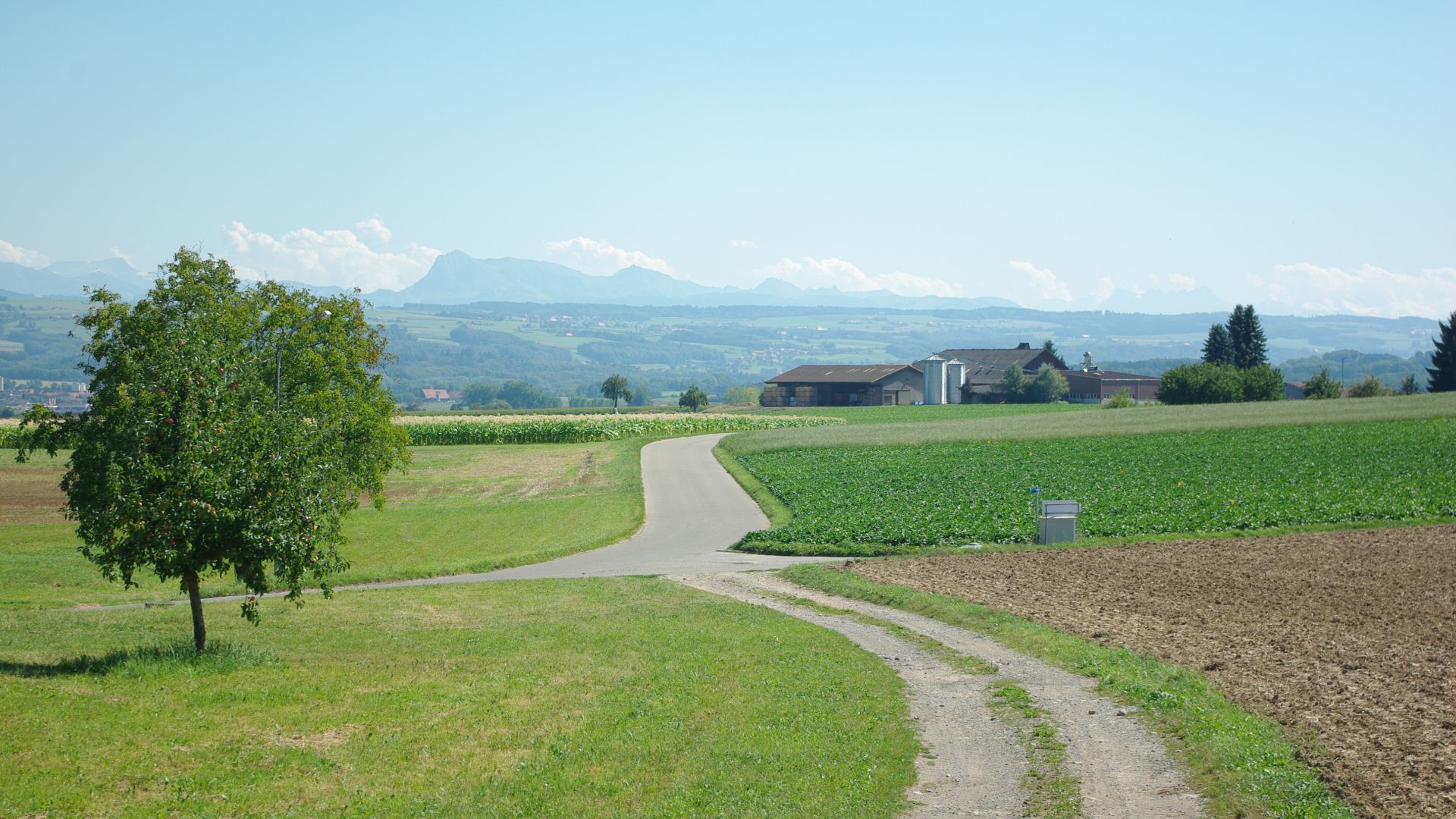 9/10 To determine the structure of the habitat in which the owl hunts, we do not rely on aerial photos which tend to be out of date. We climb through the study zone and scrupulously note the type and height of the surrounding vegetation. © Paul Béziers 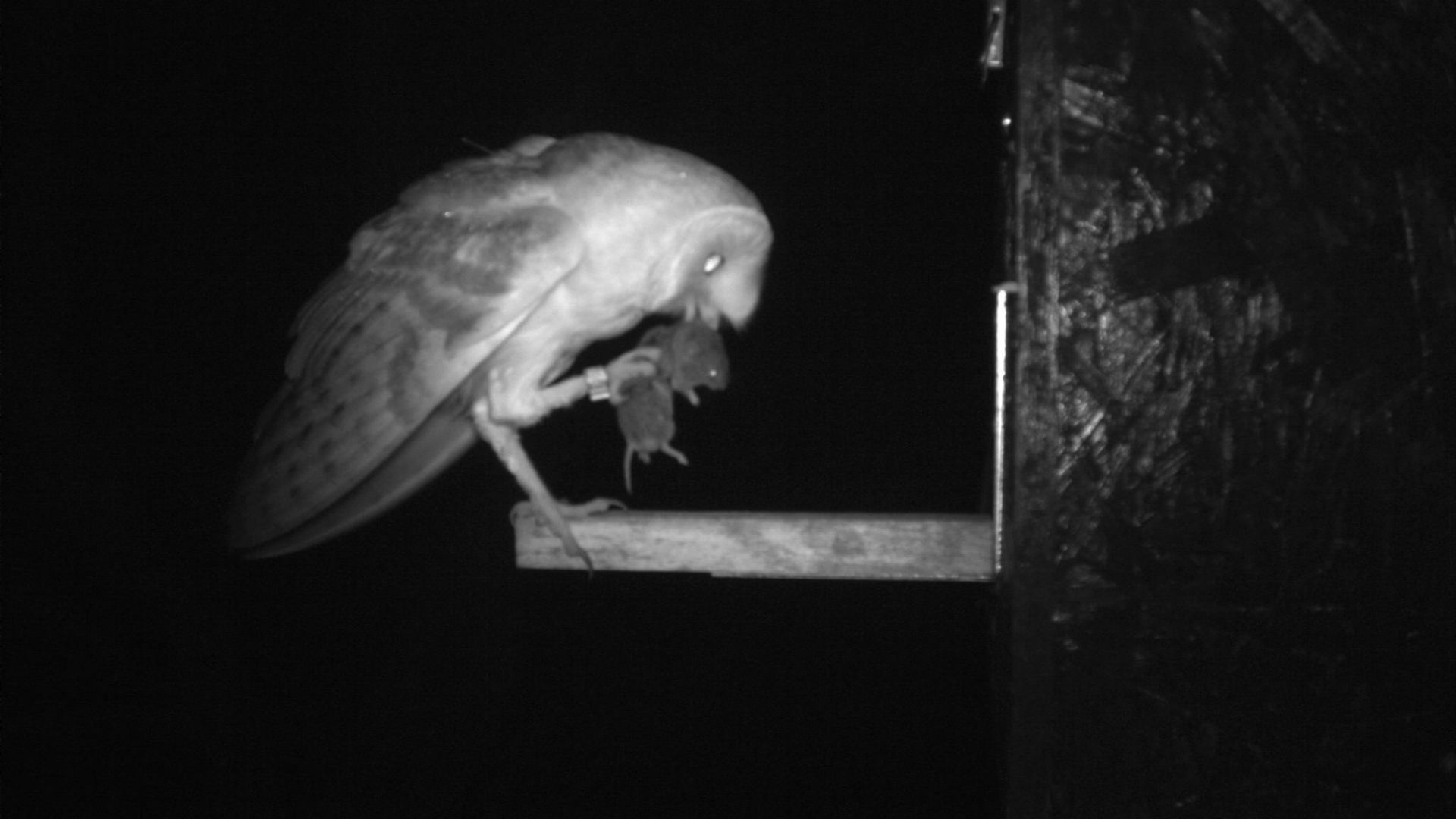 10/10 We place cameratraps (automatic cameras) in front of the nestboxes. By combining the photographic data with data from the GPS and the accelerometers, we are then able to precisely determine what kind of prey was hunted where and when. This photo shows a Barn owl arriving in its nest with a vole. © Barn owl research group

In Switzerland, Barn Owls live in rural areas. They readily nest in barns and sheds. This is an owl that doesn’t seem to overly mind being near humans who, through agriculture, offer it an open space that is varied and hosts an abundance of small mammals, just perfect for hunting. The intensification of agricultural practices, however, diminishes Barn Owl populations by homogenizing the farming landscape and reducing the number of rodents. And yet Barn Owls are a high-quality ally for farmers. Their intense appetite for the rodents that harm crops make this species an effective biological control agent.

To study how owls move in their habitats, we install devices onto their backs that combine a GPS with a miniature accelerometer. For several days during the breeding season (from March to October), we record the movements of the monitored owls and this shows us their activities (hunting, perched, capture of a prey, etc.). This enables us to know the habitats selected by Barn Owls for hunting, for example. Gathering this type of data allows us, over time, to protect the habitats that are important for this species. Indeed, just like many other species living in rural areas, Barn Owls have greatly suffered from the intensification of agricultural practices which limit the availability of good hunting sites, and from urbanization which reduces the number of available nesting sites. Efforts are thus needed to protect both the species and its habitat.

Preliminary results indicate that Barn Owls prefer hunting in wide zones like prairies and fallow fields, but without completely ignoring the crop fields that make up the majority of their available habitat. They avoid forests, for which they are less adapted, and also maybe to avoid competing with the Tawny Owl who is found in that habitat.

We use the accelerometers to measure variations in a Barn Owl’s body position, and so we know when the owl is beating its wings, when it’s gliding, when it’s diving toward prey in a strike, and also when it’s sitting immobile on a perch. This makes it possible for us to study how the owls hunt. We know that they primarily use two different hunting techniques. The first is when they perch on a post or other location, watching for prey and then diving suddenly. The second is hunting while in flight, when they glide silently through the air looking for prey. The data from the accelerometers enables us to quantify how much time is spent with each technique as well as determine the success rate of both methods. Our first results indicate that hunting from a perch has a higher success rate, but it is used less than hunting while in flight. This is probably because hunting from a perch takes more time. We also study the influence of weather conditions on the choice of hunting strategy. For example, the owls more readily hunt from a perch when it’s very windy.

Equipping the owls with a GPS enabled us to discover an unexpected behavior: certain owls visit nestboxes even when they have a brood being raised in a different one. We have noted, in fact, that certain Barn Owls sometimes pass from nestbox to nestbox in their neighborhood. We are studying the possibility that these might be exploratory visits in view of a future clutch. Knowing that sometimes females leave the nest before the owlets are completely raised, it is possible that they visit other nestboxes to get a new clutch of eggs laid very shortly afterward.